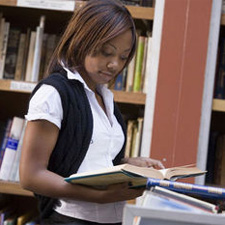 With the increasing use of ebooks and the internet, some people are asking the question: Are libraries still relevant? The answer, according to a recent Pew study, is yes. The study cites that 94 percent of Americans believe that libraries are still fundamental to our society.

Today our libraries offer members more resources than ever before. In addition to being able to check out a variety of books, you can also use libraries to find a job, apply to college or study for that big final you have coming up. Often, main library branches will offer events that are exciting, engaging and—best of all—free! The branches of the Boston Public Library (BPL) offer ESL beginner classes to adults, preschool and toddler story times, film series for adults, yoga for seniors and even a teen video gaming club. You can also access genealogy records, borrow museum passes, use free wireless, check out ebooks through the library’s online system and participate in the Author Talk Series at the central BPL location.

With all of these great resources being offered, it is fair to say that libraries are more relevant and more exciting than they have ever been. While many people today rely on the internet for information, they might instead consider relying on libraries, truly valuable sources of knowledge. In fact, libraries are often better sources of information. Most of the books in libraries have been put through some sort of editing or quality-control process to ensure accuracy. This is not true for many sources of information on the internet. In addition, it is hard to find verifiable information online. In comparison, libraries are filled with resources that provide a thorough explanation for a wealth of knowledge.

For libraries to be able to maintain their relevance in today’s technology-driven society, they will need to continue to improve the technology available to their members in the future. Access to computers and printers are a popular service that libraries offer, and keeping these services updated and in working order is vital to keeping members happy.

There have been many suggestions as to how technology can be improved in our libraries. One popular solution is to have all media digitized so that libraries would become online-only resources. This is an unlikely solution, however, because it would be a costly endeavor. In addition, libraries provide so much more to their members than the ability to check out books. Therefore, I believe that the best solution would be to incorporate as much technology as possible into libraries while still maintaining a community atmosphere. Hopefully in the future, libraries will continue to be thought of as meeting spaces where members can do research, attend classes and have the opportunity to check out books in the most efficient way possible.

The Library of Congress in Washington, DC, is the largest library in the world, boasting millions of books, maps, recordings and more. It was established in 1800 by President John Adams but didn’t last long thanks to invading British troops who set fire to the Capitol building in which the library was located. Thankfully, former President Thomas Jefferson offered to donate his personal collection to the nation. His private collection had been developed over a period of 50 years and amounted to over six thousand books! It included books on science, foreign languages, literature, philosophy and more. The collection provided a great foundation for future generations to build upon.

About the Author: Liz Canon