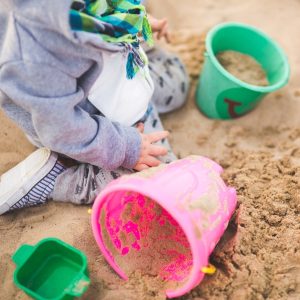 When I was five and growing up in Oakland, my parents would drive my older brother and me out to Berkeley, California, for a weekend afternoon at Adventure Playground. It was our favorite place in the world: a half-acre of dirt and lopsided structures that looked built by children because they had been. I remember working together with a dozen other five-, six- and seven-year-olds making the rails for a huge wooden fort that still stands to this day. We—my brother and I—and the thousands of other kids who have been visiting the park since 1979 have hammered, nailed, sawed and painted this place into existence under light supervision.

Was it a little dangerous to give young children these tools and have them go to work in whatever way they wanted? Yes, and according to Dr. Stuart Brown of the National Institute for Play, that’s the point. “It’s really central that kids are able to take their natural and intense play impulses and act on them,” Dr. Brown said in an interview with NPR. And while there are only a few playgrounds like this in the states, adventure playgrounds have been huge in Europe for years now. It all started in the aftermath of World War II with Lady Marjorie Allen, a landscape architect who studied children playing in traditional playgrounds. She found that they would rather play with movable parts and create their own structures.

Over the years, Lady Allen’s idea has spread. There’s the The Land, in Wales in the UK, which to the uninitiated eye looks more like a junkyard than a playground. There are very few parents in the park, and the kids are free to swing across the creek on an old rope, start campfires (under the supervision of a trained “playworker”) just to see what happens, and whatever else pops into their heads. There are around 1,000 adventure playgrounds like The Land throughout Europe, mainly located in Switzerland, the Netherlands, France, Germany and England. Their popularity shows that these kids are thoroughly enjoying the chance to explore, build and destroy in whatever fashion they want.

Fifteen years later, I still vividly remember the days spent at Adventure Playground as the first time I was totally allowed to follow my creative urges. I believe that spirit of independence has stayed with me ever since.

In the first two years of The Land running, there has not been any injury worse than the occasional scraped knee.