A Pocket Library: Why 1400s Venice Was the Silicon Valley of Publishing

A Pocket Library: Why 1400s Venice Was the Silicon Valley of Publishing 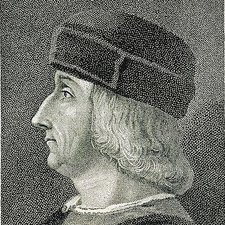 It’s a hot, summer day and you’ve hit the beach. On your way to the water, how many people do you see enjoying the sun with a book or e-reader in their lap? It’s a common sight—I know I never go to the beach without at least one book in my bag—but reading on the beach would be impossible without the work of a renaissance printer. His name? Aldus Manutius, and he changed the face of publishing as we know it.

Venice in the 1400s was a hub of printing revolution. Aldus and his printing press, Aldine Press, were right in the middle of it all. By today’s standards, the amount of monumental change that the printing industry underwent there would rival today’s Silicon Valley. Basically, Aldus Manutius is to modern books as Steve Jobs is to the iPhone.

Aldus’ first achievement involved font choice. He was the first to use an italic font—which mimicked human handwriting—and in doing so, replaced the heavy Gothic print most printers used at the time. He used this italic typeface for the first time to print Virgil in 1501 and countless other books to follow. It’s estimated that the Manutius family printed over 1,000 editions over the course of 100 years.

In all of these printings, Aldus kept his use of colons and semicolons consistent in each edition, standardizing punctuation for the industry.

Out of all of Aldus’ many accomplishments, however, one has impacted everything from large trade publishing to your trip to the beach.

Before Aldus, books were luxury items, kept in monasteries or collections. They were large, cumbersome and expensive—not at all accessible to the public. Aldus used his press to print books small enough to be carried around for study or pleasure, calling them libelli portatiles (Latin for “portable books”). This opened up the literary world to the general public, allowing more to be able to enjoy both classic and modern books. Aldus single-handedly shaped the sharing of ideas and communication as we know it today.

These “portable books” were the predecessor to modern paperbacks. Without Aldus, we would have to lug a huge, cumbersome tome to the beach—or not be able to bring anything to read at all. I don’t know about you, but that’s not the kind of beach trip I want to have. Thanks, Aldus!

Back when typefaces were set by hand and made of metal, there was an entire neighborhood in New York City devoted to type foundries. These few blocks were known as the Type Ward, which reached its height in the 1800s and thrived thanks to the newspaper industry.