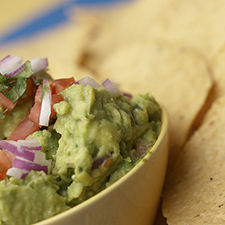 One day, Jonathan Safran Foer was eating a burrito, yearning for something to read. It sounds like the start of a bad joke, but was actually the beginning of a new idea. Foer, most famous for his bestselling novels Everything Is Illuminated and Extremely Loud and Incredibly Close, contacted Chipotle CEO Steve Ells, partnered up with the restaurant and made his idea of reading while burrito-eating come to life.

In May 2014, Chipotle announced the Cultivating Thought author series, curated by Jonathan Safran Foer. This project gathers writing from an eclectic blend of famous folks involved in the arts, including producer Judd Apatow, novelist Toni Morrison, comedian Sarah Silverman and actor Bill Hader, among several others, and publishes their two-minute reads on Chipotle’s bags and fountain-drink cups. Foer said in a Vanity Fair interview, “I wanted some that were essayistic, some fiction, some things that were funny, and [some that were] somewhat thought provoking.” In addition to the texts, each style of bag and cup is accompanied by illustrations from various artists, including Antony Hare, whose work appears in Esquire, The New York Times, The New Yorker, Vanity Fair and other popular publications.

Foer had reservations about getting involved with such a large corporation, especially one that serves meat—Foer is a vegetarian. Despite his initial uncertainty, Foer agreed to partner with the company, because “a lot of people don’t have access to libraries or bookstores. Something felt very democratic and good about this.” In another statement, Foer expounds, “We live in a world in which there is shrinking space for literature and writing, and less time than ever for quiet reflection. The idea of expanding the space and time, of creating a small pocket of thoughtfulness right in the middle of the busy day, was inspiring to me . . .”

Being the foodies that we are at Publishing Solutions Group, it only made sense to travel to the Chipotle down the street and see for ourselves. The group’s collection of cups and bags displayed several of the different texts and illustrations, and the detail in each design really stood out—enough to be the only topic of discussion over our shared lunch break.

Amidst my grilled chicken burrito, I found myself not only reading the entirety of Michael Lewis’ “The Two-Minute Minute,” but also laughing aloud when I reached the second paragraph:

This morning Walker (my five year old son) asks me if I had a pet when I was a kid. “Yes,” I say, “I had a Siamese cat that I loved named Ding How, but he got run over by a car.” Walker: “It’s lucky that it got killed by a car.” Me: “Why?” Walker: “Because then you could get a new cat that isn’t named Ding How.”

So far, it appears Chipotle has garnered a few new fans with this literary campaign, but they certainly aren’t the first business to use quotes and texts on their products. From the advent of the fortune cookie to the generations of children who enjoy the punny jokes on their Popsicle sticks, companies have been benefitting from this style of marketing for decades.

In the early ’90s, Dove Chocolate launched Promises, a campaign that included inspirational quotes on their chocolates’ foil wrappers, such as: “You are exactly where you are supposed to be” and “Don’t settle for a spark . . . light a fire instead.” About a decade later, Snapple rolled out their Real Facts on the flip side of their bottle caps, and Altoids jumped on the quirky-facts train with their Curiously Strong Facts. In the last few years, we’ve taken comfort in Hall’s Pep Talk in Every Drop cough-drop wrappers when we’re sick and in Starbucks’s The Way I See It thoughtful quotes on the backs of their coffee cups while we get our caffeine fix. These are just a few examples of the two cents given back to us—a quick flash of inspiration that leaves a fleeting impression on us in an otherwise manic marketing world.

I have to say that my burrito was a little bit more fulfilling knowing I was supporting the distribution of literature. And instead of the usual post-fast-food shame I feel upon returning to my desk after, say, a Wendy’s run, it sure was nice to digest something besides a meal that tips 1000 calories.

Jonathan Safran Foer isn’t the only vegetarian whose writing appears on the Chipotle bags and cups; Sarah Silverman has been a vegetarian since age 10, and Judd Apatow went vegetarian for one year. As for Chipotle CEO Steve Ells? “I am not a vegetarian, but I am a meat reducer.” Like the range of its content, the Cultivating Thought campaign also had a wide range of cuisine experience on its team.